The roof over your head is arguably your home's most important feature, and it is one that when well maintained will prevent significant structural deterioration, expense and loss of home value. However, as with nearly every other profession, there are roofing contractors that offer professional and efficient service and those that offer frustration, immense expense and even owner liability issues.

Knowing the difference between the pros and the connivers is not all that difficult, but it does require knowing what the more likely scams are, understanding where to turn for information on individual contractors, asking the right questions, and understanding the details of a good contract.

"The data shows that since replacing a roof is a rather large expense; you need to find a roofer who is dependable and will do a good job," said Southwick. "People are turning to the Better Business Bureau to find and vet a contractor in their area."

Despite the fact that the above data shows how seriously most people take selecting a roofing contractor, there are still a number of scams out there. As with any profession, roofing contractors have more than their fair share of war stories when it comes to the jobs they've done and the things they've seen. These stories can also serve as an apt means to warn homeowners as to the type and nature of common scams consumers must be aware of. 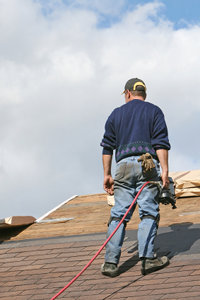 According to James Kirby, associate executive director of technical communications for the National Roofing Contractors Association, there are a few golden oldies to look out for.

"There's always the storm chasers," said Kirby. "You know, a hail storm runs through Kansas or some other area and there are [roofers] that literally chase these storms. A lot of them are very good, they are reputable, and they can do very good work, but we hear quite a few stories from people about a roofer that came in, didn't do a very good job and now a little while later they are having trouble and they tell us they don't know how to find the person or the business.

"The other thing we hear a lot about is the homeowner that takes the lowest bid, even when it's quite a bit lower than the other bids, but then the price goes up as problems are found or they need more materials or what have you. Contracting and construction should not just be about the bottom line. You need to look at the entirety of the offer and service. We get quite a few people that call saying they got a bad job and when we ask how many bids they received and which one they picked, invariably they say they took the low bid. Well, you get what you pay for--you pick the cheapest bid, you will likely get the cheapest materials, lower quality work because they are rushing, and so on."

Randy Miller, owner of Allrite Home & Remodeling and a member of the National Association of the Remodeling Industry, refers to the above scam as the "Elevator Ride."

"This is where they come in and underbid, then later after they start working they force the homeowner to pay more money," said Miller. "We always factor in a couple of boards that may need to be replaced when we put together a bid. A good contractor will also look in the attic for bad boards, sufficient insulation, ventilation, and may even work with whole home energy auditors in order to do the best job possible.

"One other time, we followed up on a job where a company came in, tore off the shingles, left all kinds of debris on the ground, asked for their second check and were given it. Then they left the debris and roof completely exposed and never came back.

"There are also companies that misrepresent the [roofing products] manufacturer they are affiliated with or even what their company's name is. Some are also dishonest about the longevity of their business. You know, for example, a guy works for a family member as a teenager for a few years and then goes to college and starts a whole other career then decides to get into roofing again. He only has the high school roofing experience, but he's now 30-years-old and claims 15 years of experience. Another way I've seen this done is there are four guys on a crew and each has four years so they claim 16 years of experience."

With the economy having taken a hit in recent months, Miller said there likely are more weekend warriors trying to get into the business. "In tough economic times, when it is hard to find a job, people who feel they have any experience in the past think they can go ahead and handle roofing. A lot of these guys will ask the customer to purchase the materials and say, "Just pay me for the labor." Then they don't do a very good job and leave a lot of cleanup behind."

Both Kirby and Miller noted that liability is an important issue to consider. Roofing, since it involves heights, is an inherently dangerous business. A roofing contractor who is not properly insured--including workman's comp--could leave you liable for any accidents that occur on your property. This issue is critically important when considering the number of new roofers in the business--are they insured and will their coverage protect you from liability?

Kirby and Miller also warn about the contractor who wants a large down payment prior to even beginning the work. "If a contractor asks for half to three-quarters down, you are fronting nearly all of the project rather than the contractor having to prove he has done a quality job prior to releasing all of the funds," says Kirby.

From the Contractor's Point-of-View It is also important to understand that the relationship between you and a roofing contractor is a two-way street. The biggest concern a legitimate contractor has is not performing the work to the homeowner's expectations leading to time consuming fixes and even lack of payment.

"Most contractors welcome an informed homeowner because it's something of a red flag if a customer wants the best possible job, but appears uneducated or doesn't want to discuss the work to be done," said Kirby. What he means by this is that it is important for you to understand what the roofer is going to do--what is the fairly standard work to be done, the products and colors or materials to be used, as well as if there is any intricate or specialty work required around dormers or chimneys, for example. "A contractor wants a reasonable and rational homeowner that has done their research so they know what they want and can discuss it with the contractor and then these elements can be placed in a proposal and the contract. It may take a little effort from the homeowner's part, but you are doing a much better job at joining expectations."

Celia Kuperszmid Lehrman, deputy home editor for Consumer Reports, has more than 20 years of researching and writing about contractors in general and roofers in particular. She offers the following list of suggestions that any homeowner would be wise to follow in order to avoid the above scams and pitfalls:

Check for insurance -- You want to get the carrier and policy number and follow up on it to make sure it is current and that it covers the company and its workers;

Check certifications -- Make sure they are properly certified to do the work by either the National Roofing Contractors Association, the National Association of the Remodeling Industry, or any other state or local organization. Also check on any manufacturer's certifications as well as with the Better Business Bureau for any complaints and how long they have been in the business.

Word of mouth -- Do you have friends and neighbors that have recently installed a new roof? If so, ask them who they used and what their thoughts were. The Better Business Bureau is also a great resource as are a number of websites such as Angie's List to check a roofer's reputation.

Know and understand the work they are going to do -- Understand what work is a matter of course--generally used materials and practices--and what may require some special skills or materials. You also want to make sure they are not going to take any shortcuts such as try to lay a third layer of roofing over two existent layers. Two is fine, says Lehrman, but three poses a risk of overloading the roof.

Do your own inspection -- Use binoculars to check for cracked, curled, or missing shingles because these are signs the roof is nearing the end of its useful life as well as indications of where potential problems may be hiding. Check the chimney and skylights for cracks as this may mean water has penetrated the roof and may require more work. Also go up into the attic and look around the chimney and the boards you can see for any signs of water seeping through. If there is evidence of water, you may need to replace more roof boards than previously thought. 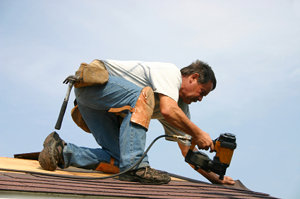 Get the most information upfront you can -- Look at ratings and prices of different roofing products and know what the contractor is going to use so you can lock in a price upfront. Know the work they will do. Find out who will actually do the work--the person making the bid or some other group.

Contract, contract, contract -- Get as detailed a written contract as is possible and then build in some wiggle room to incorporate possible unanticipated costs by creating plausible what-if scenarios--what could they be and what could they add to the project. It is also important to include a process for how to handle the need for additional work or materials that will add to the cost as well as how payment is to be structured (for example, one-third to start, one-third at the midpoint, and one-third after completion).

Get a lien release -- This will protect you from a contractor who owes a supplier for supplies after you have already paid the contractor. Essentially, if the contractor has your money but hasn't paid for the supplies, you will be liable for what is unpaid.

Lehrman also offered a couple of cost saving tips. The first is to time when you are going to have the work done. Summer is the busiest season for roofers, so if you are not in a rush, waiting until the fall may save money. Contractors will also have winnowed out their temporary, and likely less experienced workers by the fall, which means you are more likely to get their A-team.

In the end, these strategies will help you avoid many, if not all, of the possible scams or problems that could occur when installing a new roof. The bottom line is, as Miller said, "Put it into the professional's hands to do everything from the tear up and shingling and clean up because these professionals know how to protect the property and how much to tear off to keep it water tight and so on. Better off not to be penny wise and pound foolish."